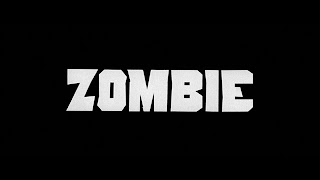 Zombi 2 is the unofficial sequel to Dawn of the Dead, which was named Zombi in Italy. After that more and more Zombi(e) films followed. In 1988 Fulci directed his own sequel to Zombi 2 called Zombi 3. Though in 1981, 7 years prior to Fulci's Zombi 3, an unofficial sequel to Zombi 2 got released also called Zombi 3 (A.K.A. Burial Grounds: Night of Terror). After that more Zombi titles got released. Zombie 4: Oltre la Morte, Zombie 5: Killing Birds, Zombie 6 (A.K.A. Rosso Sangue) and if you look closely you'll also find a Zombi 7 (A.K.A. Zombie '90: Extreme Pelistince) directed by German trash director Andreas Schnaas. The best thing of it all is that non of this movies have anything to do with each other.

A zombie is found aboard a boat off the New York coast which belongs to do a famous scientist. Peter West, a journalist, travels to the Antilles with Ann, the daughter of the scientist. On the way, they meet with with Brian, a ethnologist, and Susan. When they arrive at Matul Island, they find Dr. Menard, and discover a terrifying disease which is turning the islanders into horrifying zombies which devour human flesh and seem indestructible.... 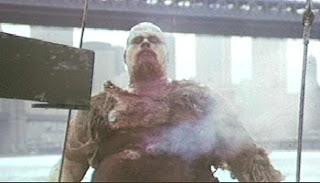 Although many see Zombi 2 as the ugly, nasty brother of ''masterpiece'' Dawn of the Dead I don't see it quite that way. I liked Dawn of the Dead a lot but if I compare it to Zombi 2 I come to the conclusion that Fulci beats Romero on pretty much every aspect. The tone is set immediately. A zombie covered in white sheets gets his head blown after he comes back to life. After that the openingtitles appear also featuring the fantastic morbid. The scene following that in the harbor of New York is beautiful. The atmosphere is sublime and the fat zombie that comes out of the abandoned only provides more and more fun.

After that the film calms down a bit. We get to know the characters, the main ones being cult actor Ian McCulloch and Tisa Farrow. For some this might be a bit boring but I thought McCulloch had enough charisma to carry the film and the soundtrack composed by Fabio Frizzi is so great that it is almost impossible no to like this movie.

After a while they get on a boat (Captained by Al Cliver who was a regular face in 80's Italian action/horror flicks) and head to a mysterious island where later a lot of blood will flow. But before they arrive there is another very  notable scene. Of course i'm talking about the zombie vs shark scene which I think is one of the best and notable scene in the history of horror. Arriving on the island more and more dead people start walking again searching for victims to put their rotten teeth in. The atmosphere stays incredibly strong and there is more than enough gore to enjoy. There is a very cool looking splinter meets eye scene where Olga Karlatos' beautiful eyes gets drilled by a piece of wood (well actually this only happens to one of her eyes) and there also numerous scenes where zombies have a human meat feast. 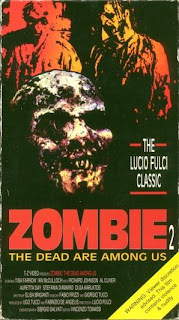 Zombi 2 is one of the best zombie films i've seen so far (which are quite a lot). The atmosphere is amazing, the music very cool and the gore and make-up is nasty and effective. Add to that a very cool shot where zombies are walking on the Brooklyn Bridge and there is only one conclusion: Fulci knew how to make a fucking kick-ass zombie movie.

Fun fact (Source: IMDB)
As shown in trailers before the film was released, airline "barf bags" were handed out to theater moviegoers due to the unusually high amount of violence and gore for a horror film of that time.